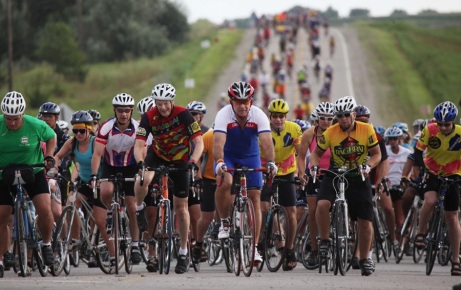 I recently rode more than 130 miles on my bicycle over two days.  It was glorious.

If you are biker in the U.S. Midwest, you may have heard of RAGBRAI. For those of you who haven’t, it is an acronym for the Register’s Annual Great Bicycle Ride Across Iowa. One July week every year, thousands of bicyclers start on a town on the Missouri River and ride ranging 60-100 miles daily until they reach the Mississippi River. There is a different route every year and host towns vie for the privilege to have an influx of bikers – and their dollars – grace their town limits either for a ride through, or an overnight stay.

Riders camp, sleep on couches (of any acquaintance they can talk into), or hotels. The route is announced at a January release party and hotels are immediately booked up. The tradition is to dip your tire in the Missouri at the beginning and again dip in the Mississippi at the end.

The ride started in 1973 by John Karras and Don Kaul – two newspaper writers at The Des Moines Register. It was little more than a challenge in the beginning by two guys that liked to bike. After 45 years, the official total to week long riders is ~8,500, but there are many more riders that join for a day or two and the throng can swell to an estimated 36,000. (Lance Armstrong has ridden days for several years.)

It’s this last group of riders in which I fall.  I’ve ridden days here and there four different years, but never two in a row.

I have a couple of favorite moments. The first was when we were riding up this long-ass, steep hill — long, as in over two miles and a tough grade. By the time I got up that hill, a fellow rider had gotten off her bike, pulled out her small trumpet like horn and was playing the theme from the movie Rocky.  #perfect

Another favorite was on the second day, late afternoon in the hot, relentless sun going up hill after hill and I stop at the first place I see shade. The shadow of a big red barn at the top of a hill.  Three 30 something males had the same idea and were already sprawled out in the grass.  I plop down while we discuss the relentlessness of the sun — did I mention the relentless sun? — and we exchange first names.

Paul has a quart bottle of clear alcohol in one hand and of bottle of pop in the other and he is taking a drink from each before he swallows. One of their friends rides off the road and de-bikes while laying down on his stomach in one motion. He swears he isn’t going to make it unless he naps forever right there.  They have stories to tell from the entire week, partying, sleeping in a cemetery under the stars, losing people, etc. Good connecting in the middle of nowhere America.

It was glorious. The more than 130 miles on my bicycle I rode over two days.  Next year, I might need to do a week.

Debra Happe is a writer and marketing professional based in Des Moines, Iowa. Debra does business, magazine, and freelance copywriting work. Specialties include science-based, environmental, and technological. Connect on LinkedIn for professional inquiries.